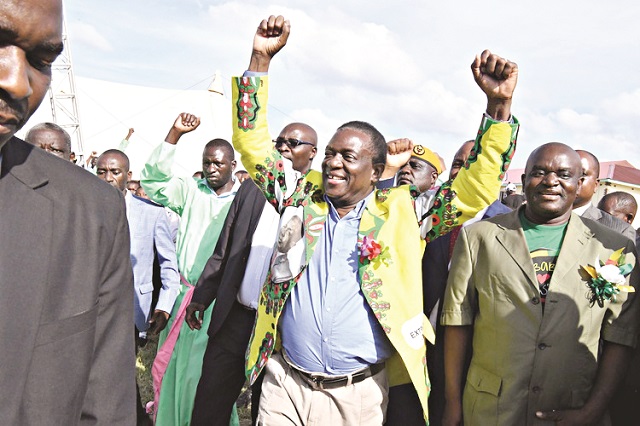 ZANU-PF spokesperson Simon Khaya-Moyo has cleared the air over President Emmerson Mnangagwa’s strange failure to hit the campaign trail when the country is four months away from elections.

Mnangagwa is conspicuous by his absence on the campaign arena, a time his main challenger Nelson Chamisa and allies have almost covered every piece of ground in the country in their bid to seek popular support ahead of the elections.

Coupled with that, he has also withdrawn his wife Auxillia from being party MP for Chirumhanzu-Zibangwe ostensibly to allow her to concentrate on some philanthropic work in the stead of first lady.

The amount of confidence Mnangagwa has displayed ahead of polls that many expect him to lose because of his links with Mugabe’s disastrous rule has ignited rigging fears among Zanu-PF opponents as was witnessed in the 2013 elections when Mugabe went on to post a thumping victory against his challengers when he was hardly on the ground campaigning.

Exiled former Higher and Tertiary Education Minister Jonathan Moyo is among those puzzled by his former ally turned bitter enemy’s failure to campaign.

Moyo suggested on twitter Mnangagwa and his deputy Constantino Chiwenga’s reluctance to hit the campaign trail could be that “they have a rigging plan”, “the army will do another coup” or “they’ve given up” amid intelligence reports they did not stand a chance to win.

But Simon Khaya Moyo told New Zimbabwe on Monday that all criticism against Mnangagwa’s apparent failure to campaign was misplaced as the Zanu-PF campaign season will only be triggered by the launch of a party manifesto.

“Campaigns begin when we launch our manifesto. None of us are campaigning. We do not start campaigning before the launch of the manifesto. That is what the position is,” Moyo said.

SK Moyo refused to comment on the puzzling 2013 experience in which Mugabe hardly campaigned but was a run-away victor in the elections.

Zimbabwe heads for her first post Mugabe elections and for the first time, the veteran politician and his nemesis, the late Morgan Tsvangirai of MDC-T will not be on the ballot paper.
– newzimbabwe