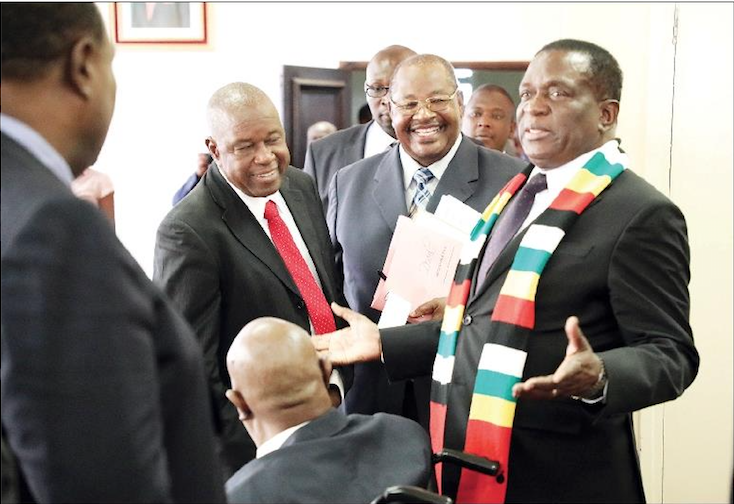 AFTER weeding out his new rivals – who brought him to power – in the security sector, President Emmerson Mnangagwa has now shifted the purges to Zanu-PF, targeting the ruling party’s heavyweights seen as a threat to his shaky grip on power, insiders said this week.

Zanu-PF secretary for administration Obert Mpofu and Speaker of the National Assembly Jacob Mudenda – who both played decisive roles in the toppling of former president Robert Mugabe, paving the way for Mnangagwa’s rise during the military coup in November 2017 – have emerged as Mnangagwa’s new targets, sources said.

The party youths, led by deputy secretary Lewis Matutu, claimed the officials were running fuel and foreign currency cartels that were bleeding the economy.

Zanu-PF insiders, however, said this week the issue was not about fighting corruption, but politics and factionalism, as well as personal vendettas, with some of the accused being collateral damage.

“Since after the general elections last year, Mnangagwa has been purging those he no longer trusts and wants in the security forces. He started with the CIO (Central Intelligence Organisation), then police and later the military,” a senior party official said. “Now he has extended the purges to the party. Mpofu, who is the new centre of power at the party headquarters, and Mudenda, as head of the legislature, hence another centre of power as well, especially if Mnangagwa’s impeachment comes, are now targeted. Those officials and former ministers now stationed at the (party) HQ (headquarters) are led by Mpofu and have become a force of resistance to Mnangagwa’s rule. That is why they are opposed to his right-hand minister, Mthuli Ncube’s austerity measures.

“At the legislature, headed by Mudenda, who is not happy that he has not been rewarded after playing a key role in Mugabe’s removal, MPs have also expressed displeasure before the president in a meeting last month complaining about Ncube’s policies and programmes, and, of course, by extension the President’s leadership as well. Most of these officials are seen as supporters or sympathisers by default of (co-Vice-President Constantino) Chiwenga, who is locked in a power struggle with ED (Mnangagwa).”

Another official said to prove that the Zanu-PF Youth League’s anti-corruption list and crusade was a political ploy, those youths held a meeting with a Mnangagwa confidant just before their press conference on June 24.

“Before the press conference, the youths met a person very close to the President to discuss the issue,” the source said. “When the politburo meeting came the following day, Mnangagwa pretended he had nothing to do with the youths, he in fact chided them for acting unprocedurally, but went on to say their allegations must be investigated. In the end, he couldn’t hide his hand behind the plot.”

Sources said just before the politburo meeting on June 27, Mnangagwa passed through Mpofu’s Zanu-PF HQ office and strategically distanced himself from the youths, claiming they were targeting Mpofu, then co-Vice-President Kembo Mohadi and eventually himself. Mpofu initially seemed to believe it until he was advised to ‘stop being naïve’. He was told Mnangagwa had a hand it in, but was playing Mugabe’s divide-and-rule tactics and he then changed his mind.”

Mpofu chaired a critical Zanu-PF central committee meeting which suspended Mugabe at the height of the coup on November 20, 2017. The same meeting also nullified Mnangagwa’s earlier expulsion from the party before elevating him to the position of acting president and first secretary of Zanu-PF. The following day, on November 21, Mudenda presided over a motion by parliament to impeach Mugabe.

However, Mpofu and Mudenda have found themselves as targets of Zanu-PF youths who have accused them of corruption.

Insiders say the youths are acting as Mnangagwa’s political proxies.

Senior Zanu-PF officials told the Zimbabwe Independent in off-the-record briefings this week Mpofu was being targeted because he had emerged as a new centre of power at the party’s national headquarters, a towering structure located on the western edge of Harare’s central business district where he has literally been confined after he lost his long-held ministerial position in Mnangagwa’s first post-election government.

The sources also said Mpofu had become the rallying point for fellow party bigwigs disgruntled after losing their cabinet posts, along with concomitant benefits and other trappings of power. They are said to be fending for themselves now, with some of them reportedly living from hand-to-mouth.

Mpofu has, in addition, reportedly become the rallying point as he is seen filling the vacant point left by Chiwenga who is currently sidelined by long illness.

Mnangagwa has an uneasy relationship with Chiwenga whose political manoeuvres since the coup that toppled Mugabe suggest he harbours presidential ambitions.

Chiwenga, who was commander of the Zimbabwe Defence Forces, orchestrated the coup which brought Mnangagwa into power. The two erstwhile allies have, however, reportedly fallen out because of the former’s presidential ambitions.

Mnangagwa, who now faces multiple centres of internal resistance, is said to be reeling under siege and has now surrounded himself with what Zanu-PF insiders described as “a small clique of political newcomers” as a political buffer. The old guard, now coalescing under Mpofu, is now seen as a dangerous hostile force.

Party sources further said Mnangagwa was eager to get rid of Mpofu whom he, despite playing a starring role in his elevation into power, has always seen as an ally of convenience.

The principal source of mistrust, insiders said, is that Mpofu derailed Mnangagwa’s failed political rise bid in 2004 by leaking critical information to Mugabe about what came to be known as the Tsholotsho Declaration.

Following the youths’ outbursts, the Zanu-PF politburo last week resolved to set up a commission on inquiry to probe the allegations.

The Independent understands the commission, which will be chaired by a prominent Harare-based female lawyer, may be announced today. It will rely on dossiers and unexplained wealth order legislation to investigate the corruption allegations.

Sources said some officials like Reserve Bank of Zimbabwe governor John Mangudya, who is targeted over alleged black market activities by central bank executives, are “collateral damage”. They are also caught up in internal bureaucratic fights.

According to the sources, Mangudya is being accused of corruption by association for allegedly protecting four of the apex bank’s managers; Mirirai Chiremba, Norman Mataruka, Gresham Muradzikwa and Azvinandawa Saburi, once targeted by former chairperson of the Finance and Economic Development Communication Taskforce Acie Lumumba.

However, a source said Mangudya’s targeting had rattled the financial system, with government books and transactions nearly flagged for scrutiny and restrictions internationally. But due to his clarifications and international networks, the issue was avoided, a source said. Mangudya has taken the corruption matter to his lawyers.

Zanu-PF spokesman Simon Khaya Moyo said it was up to Mnangagwa to decide on the date and composition of the commission.

“It entirely up to the president to decide when he will set up the commission, so I can’t tell you the date. What I can however tell you is that it is going to be an independent commission,” he said.

Zanu-PF sources said the issue is likely to open a Pandora’s box of internal power struggles, factionalism and witch-hunting that may further divide the already fragmented party.
– the independent