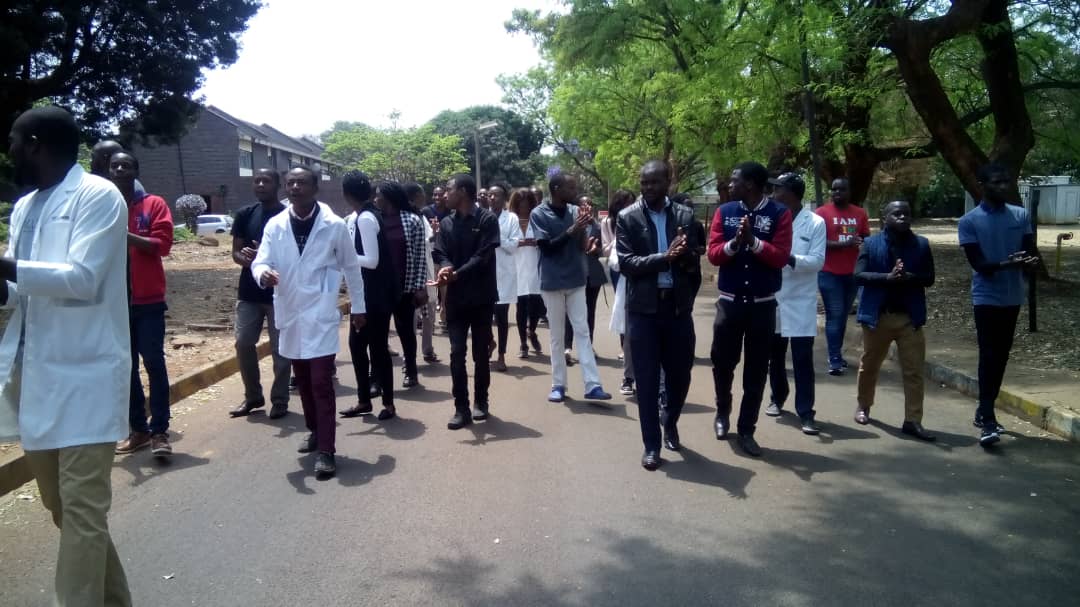 ZIMBABWE’S health crisis continues to slide down the precipice, with doctors at public hospitals yesterday vowing to extend their industrial action, promising to report for duty today, but not giving services to pressure embattled President Emmerson Mnangagwa to better their salaries and working conditions.

The doctors have also pulled out of the Health Apex Council citing its inability to solve the impasse between government and the workers, which has taken the strike to its 35th day today.

Health minister Obadiah Moyo at the weekend threatened to punish doctors who fail to report for work after offering them a 60% increase in allowances, which he claimed would take their salaries to between $8 000 and $11 000 per month.

But in a statement yesterday, the Zimbabwe Hospital Doctors Association (ZADHR) expressed concern over government’s reluctance to resolve their grievances, announcing their decision to pull out of the Health Apex Council, days after walking out on negotiations that gave them the 60% pay hike.

They described government’s reluctance to resolve the doctors’ plight as soft genocide.They said they would go to work today, but will not be offering maintaining that junior doctors would not be able to report to duty because of incapacitation.

“Today (yesterday) marks day 34 since doctors nationwide declared incapacitation … Given the amount of time that has lapsed thus far, it is quite clear and evident that the employer is not showing any remorse and does not intend to resolve this clear deadlock within a reasonable time frame,” part of the statement read.

“In the last 34 days that doctors haven’t been reporting for duty, the employer and the employee met formally just twice … representatives made it very clear that they were resoundingly declining that offer and didn’t even want to see it punched into their accounts despite the fact that other associations within the health sector had accepted the offer on health specific allowances out of desperation.”

The doctors said the continued escalation of prices had rendered the increment useless as costs of basic necessities have gone beyond the reach of many, despite the reviewed earnings.
The doctors also noted with concern Moyo’s statement on Saturday, saying the gagging was not to their liking.

“Doctors countrywide are not enjoying this silent genocide and infringement on citizens’ constitutional right to health brought about by the negligence on behalf of the employer to address the employees’ grievances within a reasonable time frame,” the doctors said.

A source privy to the developments in the doctors’ camp said the medical practitioners had conditionally heeded to Moyo’s call for them to report to duty today, citing a number of reasons for their conduct thereafter.

“We are going to work tomorrow (today), but we will remain seated because there is nothing to use at the hospitals. We do not have drugs, equipment and sundries and the junior doctors are still not able to afford to come to work,” the source said on condition of anonymity.

ZHDA spokesperson Fortune Nyamande said they were concerned by the delay in resolving doctors’ grievances as it directly and heavily impacts on the ordinary citizen in need of medical attention.

“We are particularly worried that these episodes (industrial actions) keep recurring to the detriment of patients’ lives and well-being. We remind the government that it has a constitutional obligation to provide for the right to health as stipulated in section 76 of the Constitution,” Nyamande said.

“It is high time government revises the Health Services Act and provides for the adoption of a well-funded health services commission that will adequately remunerate and motivate health workers in Zimbabwe.”

Nyamande added: “Their current model of managing human resources for health has proven to be a failure as we have witnessed health sector unrest yearly. The Minister of Health should also be proactive and lead consensus building meetings with the doctors, finance ministry and stakeholders. The government must be reminded that it is liable for any mortality and morbidity that arise from such sad situations.”

On Saturday, Moyo gave an ultimatum to doctors to report for work today or risk disciplinary action.”Government has shown its sincerity by continuously engaging the health workers to address their challenges including implementing programmes that ensure they have the needed medicine to deliver medical care. Government is, therefore, appalled that doctors have walked out from the negotiating table and from their patients who are in dire need of their care,” he said.

The doctors have embarked on five industrial actions since Mnangagwa came to power and the current one becomes the second in over-a-month of absenteeism from work as they continue to clamour for the perennial grievances that include good working conditions as well as availability of sundries and drugs in their workstations.
– newsday